“My Plan Will Always be to Give my Children the Best Life Possible”; Father-of-Two Shares his Journey as a Teen Dad 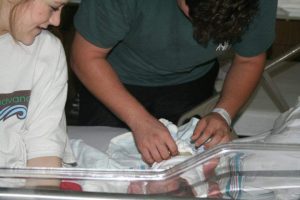 Wesley Burton is a 27-year-old devoted husband and father of two boys. Wesley welcomed his first son into the world at the young age of eighteen, soon after graduating high school. Wesley and his girlfriend visited Safe Harbor Women’s Medical Clinic soon after finding out she was pregnant. Wesley shares how he grew up fast to become the dad his son needed him to be. Wesley is an example for other fathers with his loving attitude towards his kids and his ability to overcome the challenges of becoming a father as a teen. Read more about his journey here, with a Q&A with Wesley:

!) What were your emotions when finding out your girlfriend was pregnant?

My emotions when my girlfriend told me she was pregnant was a tidal wave of different feelings. I was ecstatic, yet scared to death. I remember feeling this overwhelming urge to tell everyone I was going to be a dad, but also dreading the negativity that would come from general people it didn’t concern. It was a wake up call that my life was about to change drastically.

2) What was your support group like during the unplanned pregnancy?

We were extremely blessed with a support group of close friends and family that went above and beyond to help with this unexpected pregnancy. There was disappointment at first, and rightfully so, for parenting a child out of wedlock, but is was only momentary and quickly became delight for this little life that was coming into the world.

3)What was a surprising part of becoming a parent as a teenager?

To me, I feel that what took me most by surprise, was the fact that we now had this little human that depended on us and those around us for everything. It was suddenly knowing that I would give my life just so his could continue. My life was no longer the most important thing to me. 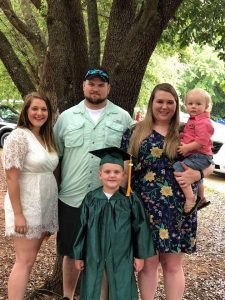 4)How did your goals change?

To be completely honest, upon graduating high school, I still had not the slightest idea of what I wanted to do career wise, but I knew I had to support my son. I had scholarships to the University of West Alabama, but I knew there was no was I could support my new family and apply myself in a four year program. I decided that a trade would be our best option since someone can learn any trade relatively quickly. HVAC-R became my career choice because I had family that had been in that field for many years.

5) What are your plans for you and your child (children) for the future?

My plans for my children are the same now as they were 9 years ago when I first found out I would be a father. That is to give my children the best life I could possibly give them. A life where they never went without anything they needed or wanted. Most of all, my goal is to give them an example of a good father and good man to be a role model for them as they grow and become their on person, and hopefully one day when asked who their dad is, they can say my name with pride.

6) How did Safe Harbor affect your and your partner’s decision to keep the baby?

Honestly, to the best of my knowledge, termination was never an option. Safe Harbor encouraged us to keep our baby, and helped place us on a path to know what to do and what to expect next.

7) What would you say to young dads who’ve just found out they are going to be a father?

To any other teenager or young man that has discovered he will be a father, do not lose yourself in the negativity and always remember you were born with a purpose. You were born to do great things, and that includes being a father. By no means is the road of parenthood easy, but God knows that it is worth it. From the minute your child is born, your outlook on life will change. You honestly won’t know how you can love someone you just met so much, and you will question how you lived as long as you did without knowing what true unconditional love is. Keep your feet planted on the high road and do what you truly feel is best for yourself and your family. One day that newborn will come running up to you as you walk in the door after a long stressful day of working, and as soon as you hang your hat, take off your boots, and hold that child in your arms, the weight of the world becomes easier to bear. Never lose hope. Never feel alone, because you have more people willing to help than you know. Someday, another young man will be in the same place you were, and he will look up to you for guidance. In a world full of darkness and hate, be a light and your blessings will come tenfold. 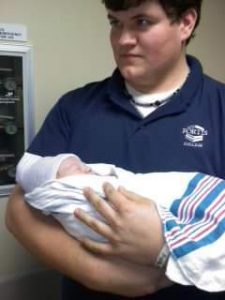